Blue Star’s Lacrosse program continues to produce quality lacrosse players. Plus, they produce quality individuals who go on to have stellar high school and collegiate careers and take their best Blue Star experiences with them.

One of those prime examples is Westfield High standout Griffin Aslanian; a Georgetown University commit who is now preparing for his senior season at Westfield before heading to DC to play for the Hoyas.

Aslanian, a talented defender and captain of his Blue Devils team, is looking forward to this spring season but is thrilled thinking about playing at Georgetown, but before that, he’s excited for another summer with Blue Star.

Blue Star has been beneficial to Griffin’s success. 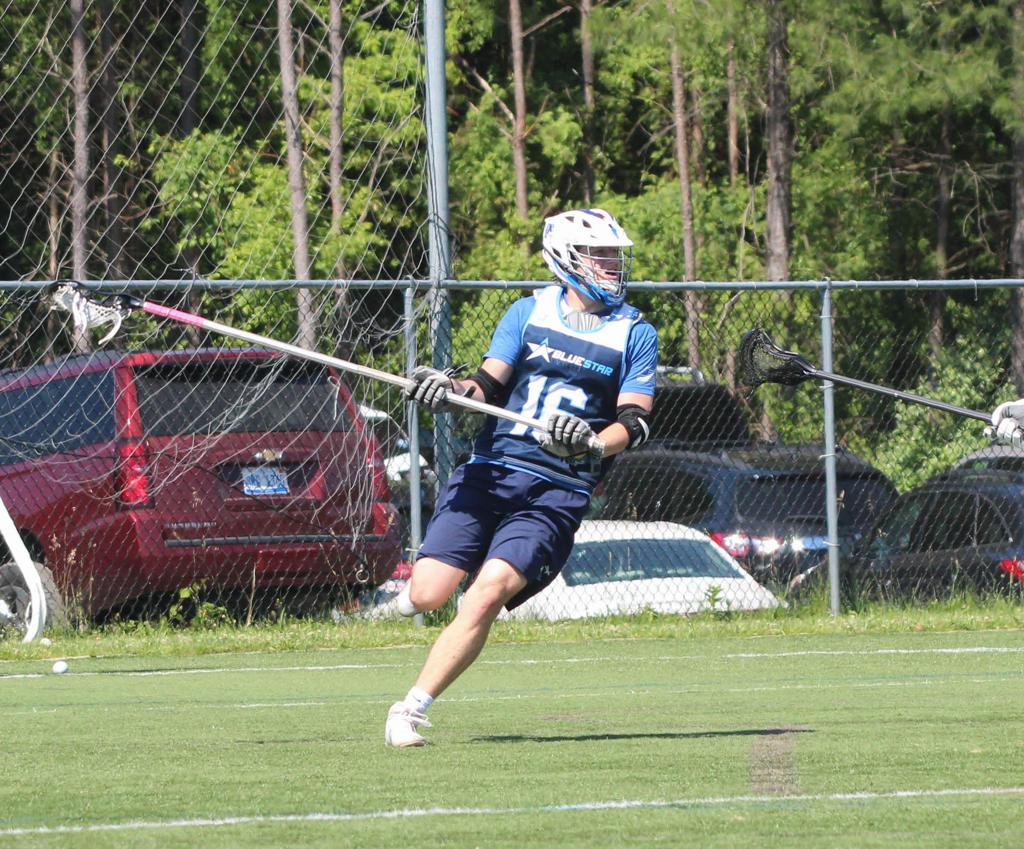 “Personally being coached by MV Whitlow and Don Green; they’ve become two of my role models in my life,” said Aslanian. “They instill basic and the lost art of dedication to the sport and the classroom and I try to carry that on as well. I come away from them gaining knowledge and they’ve just got so much to give.”

Aslanian helped his Westfield High team to a 12-6 record a year ago while playing one of toughest schedules in the state. This year the 6-1, 205-pounder is looking forward to this spring, but he’s also psyched knowing he’ll be at Blue Star this summer.

“I’ll be at Blue Star in some capacity this summer,” added Aslanian. “I look forward to what I learn, especially from MV, because he sees the game differently and that’s what makes him stand out. He has no doubt made me a better lacrosse player and being a former defenseman he’s had a lot to offer me on that front. He’s helped make me the lacrosse player that I am today.” 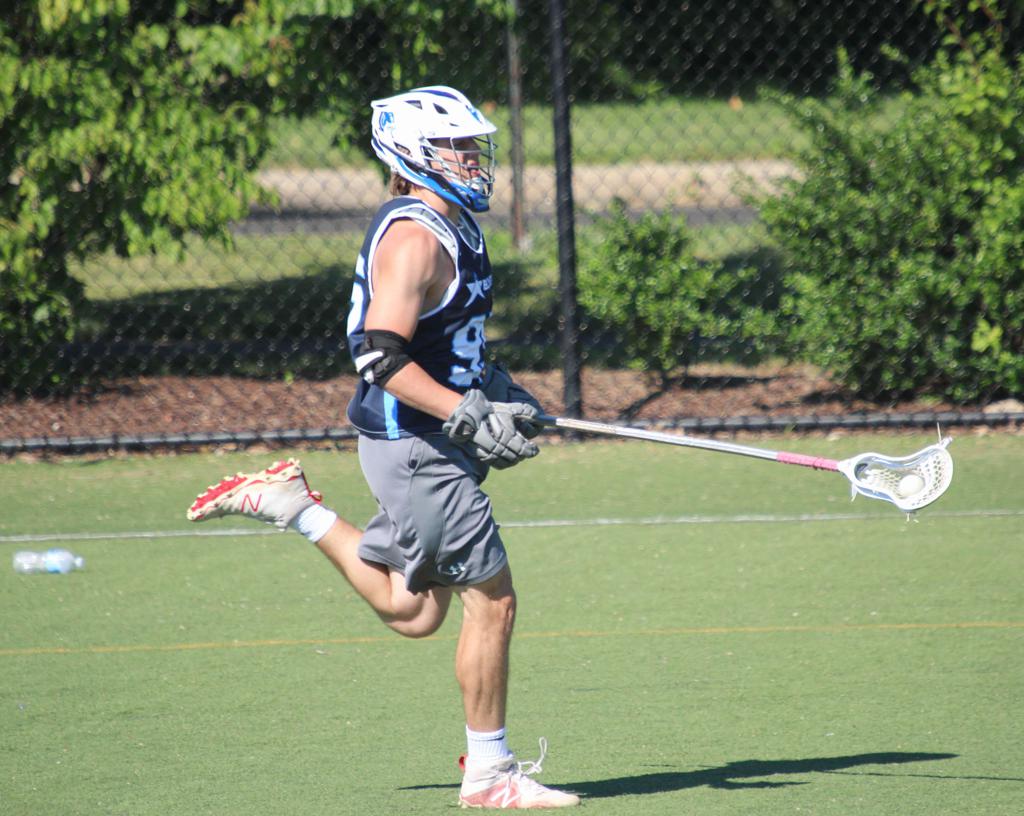 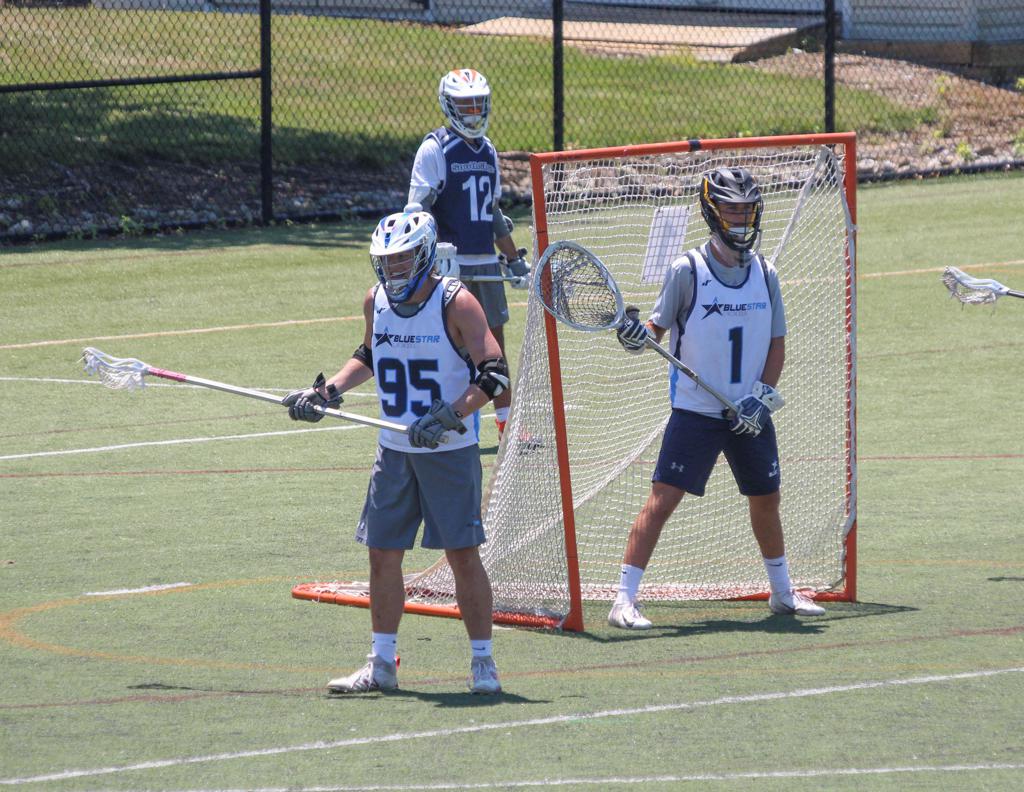 Griffin comes from a great lacrosse family from Westfield. Griff’s dad, Chris, played for Rutgers while his other two brothers, who both have been involved with Blue Star, are highly accomplished collegiate stars. Oldest brother Chris, a Blue Star grad, is a senior captain at Hobart College where he plays attack. He also played for Whitlow at Hun as a post grad where he helped the Raiders to a No. 2 national ranking.

Patrick Aslanian is a senior middie at Georgetown and has another year of eligibility if he chooses to use it, meaning he’d be playing side by side with brother Griffin. Both Chris and Patrick have recently coached at Blue Star. Griffin’s sister, Maggie, a sophomore, is also a lacrosse player at Westfield playing attack.

Obviously, playing in the Aslanian household has paid dividends for Griffin. “Our family has a passion for the game,” said Griffin. “We have a love of the game and for me it was a great experience to have. I leaned so much from being around Patrick and Chris. It was an honor to watch my two brothers play.

“It’s been great to also learn from my dad who played at Rutgers and who has passion for the game and has passed that on to us. Learning from my dad and watching my two older brother excel in lacrosse is one of the most fulfilling experiences in my life.” 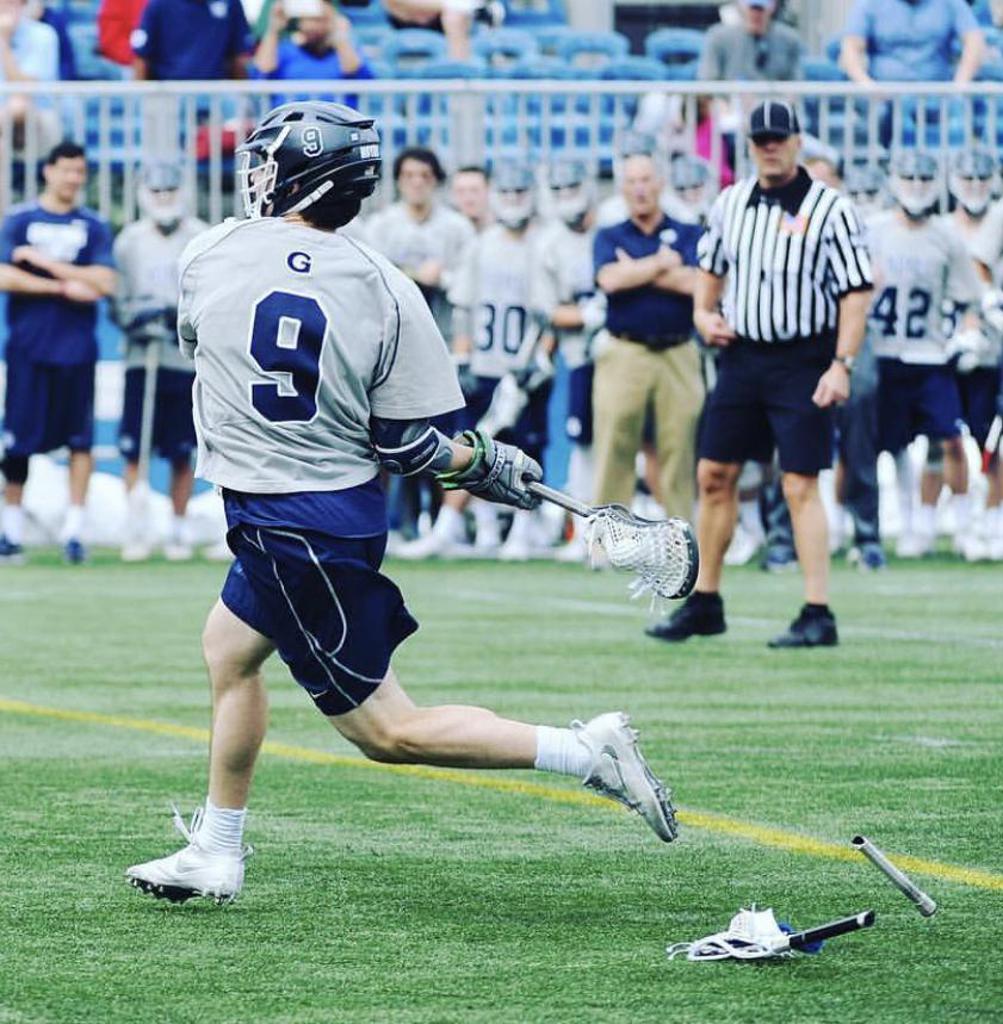 Patrick Aslanian is a senior at Georgetown 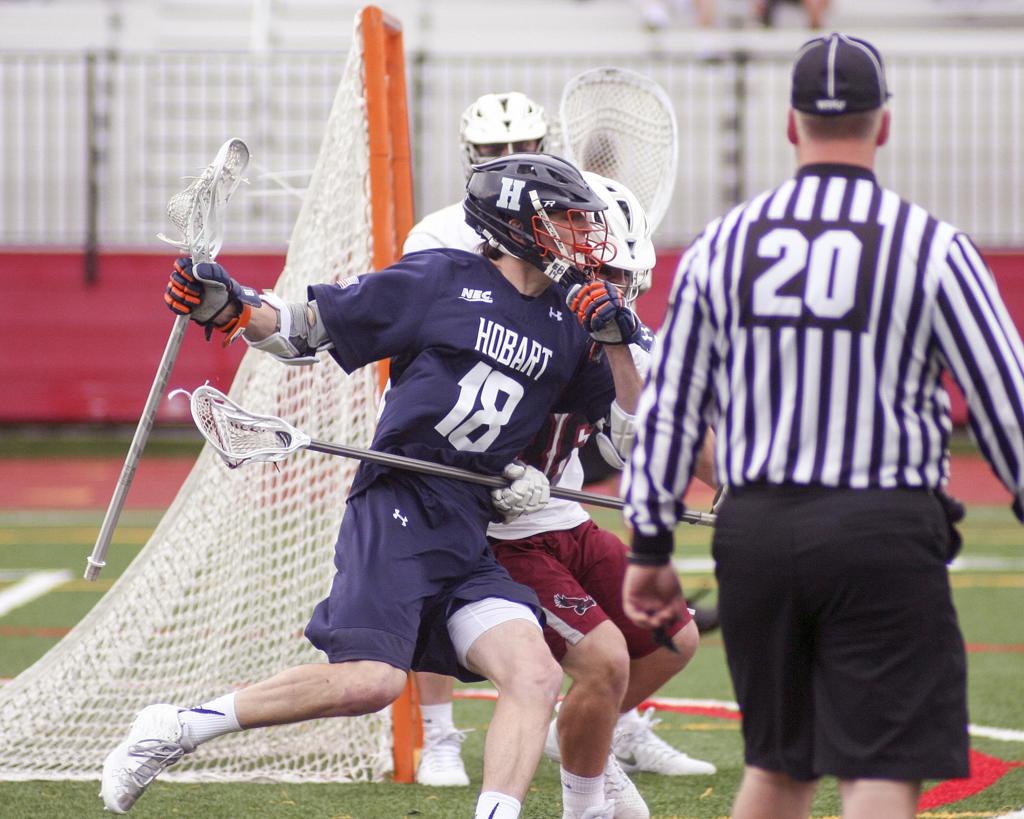 Chris Aslanian is a Senior Captain at Hobart

Griffin’s father Chris loves the experience his sons have had at Blue Star. “We’ve have a great relationship with Blue Star,” he said. “My sons and the many other Westfield players who are part of Blue Star are having great experiences. What I like about Blue Star is the great relationships between players/coaches/teammate,s the instruction is high-end, and I don’t think there is anybody better than MV at guiding us through the recruiting process.

“At camp, they do a great job developing players to make them better lacrosse players, better people, better citizens, and they also make you become better teammates and better leaders.”

Griffin also enjoyed some of the other coaches at Blue Star, like defenders Chris Fake and Owen Prybylski. Fake, an All-American at Hun, and this past year was a collegiate All-American at Yale helping them to this year’s Division 1 national championship. Prybylski played at Westfield and is now a lockdown defender at Villanova.

“Being coached by Chris Fake and Owen Prybylski was great,” said Aslanian. “They are two guys I look up to and both of them taught me a lot about the game.

“Overall, at Blue Star, you have to be very open minded to what your coaches have to say. You can’t put a price on it because it’s so invaluable. I’ve learned the biggest lesson from MV who preached on and off the field to be always be humble.” 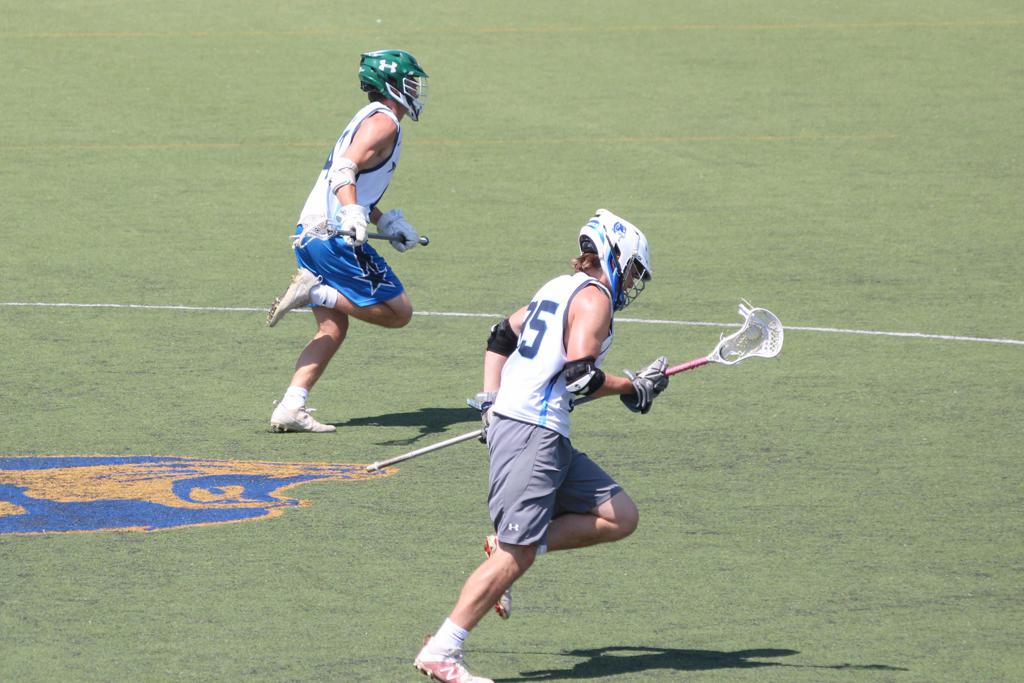 Based out of Basking Ridge, Mt. Laurel, Medford, Westfield & Princeton, New Jersey, Blue Star Lacrosse is a leader in the lacrosse industry focused on developing lacrosse players from youth through high school. We run year-round lacrosse training with camps, clinics, box lacrosse, and travel all-star teams. Our All-Star teams are among the most competitive in the country. What separates us is our level of dedication, communication, and our ability as teachers of the game that we love!

Home
About Us
News
All-Stars