Whether national Player of the Week or backup, ODU's Blake LaRussa is the same guy 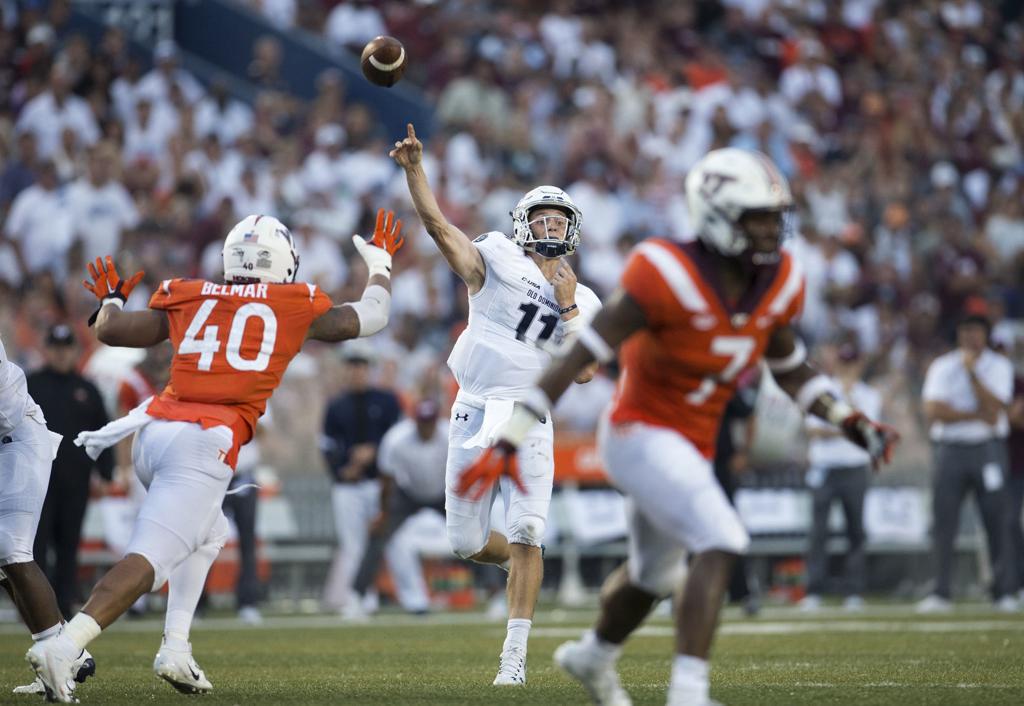 “That’s how he lives his life,” coach Bobby Wilder said. “Blake’s a very consistent human being.”

Wilder said that two weeks ago, when asked how he thought LaRussa was handling being No. 2 behind Steven Williams, a role that appeared destined to be his lot through the rest of his career.

Fast forward to last Saturday, when the redshirt junior from Bishop Sullivan Catholic came in against No. 13 Virginia Tech on the second series, and led the Monarchs to the biggest win in program history and the biggest upset of the college season.

LaRussa threw for 495 yards and four touchdowns, was named the new starter and has been bombarded with national accolades and interview requests since.

ESPN’s Kirk Herbstreit ranked LaRussa as his top performer of the week. Dennis Dodd of CBS put LaRussa at No. 5 – with two exclamation points – on his “Heisman Hype” watch, a playful addition to a list featuring the likes of Alabama’s Tua Tagovailoa and Ohio State’s Dwayne Haskins .

It will come as no surprise to anyone who’s spent time around him that LaRussa has taken all the attention in stride.

That’s how he lives his life.

“It’s a lot different than what I’m used to,” he said Wednesday. “But I think we’re just focused on this next game.”

It’s always the next thing with LaRussa, who has been methodical and steady throughout a career – and a life – in which he’s consistently been underestimated.

LaRussa’s story is well-known in these parts. Despite throwing for 3,794 yards and 52 TDs as a high school senior, at 5-foot-11 and 170 pounds, he was considered too small for Division I. His lone offer came from Division II Elizabeth City State.

Undeterred, LaRussa walked on at ODU. After redshirting in 2015 and backing up David Washington in 2016, he began last year as the starter. He lasted two games. With the offense struggling, Jordan Hoy started in Week 3 against North Carolina before Wilder turned to Williams, then a 17-year-old freshman, in the second quarter.

Williams sparked the team and was declared the starter – presumably for the next four years. LaRussa saw spot duty as his backup, and started a couple games when Williams was late for a team function. His football fate seemed sealed. But unlike many quarterbacks in that position, transferring never crossed his mind.

“This is my home. I live 20 minutes away,” he said. “I’ve always believed that this is where God has me and even if I don’t see the reason, I know I’m here for a reason.”

If that reason was to help groom Williams in the film room and on the practice field, LaRussa was OK with that.

“Our quarterbacks, all of us, we support each other,” he said. “Whatever my role is, I’ll do it the best I can.”

It’s that attitude that prompts Wilder to call LaRussa “the consummate team player” and makes him particularly beloved among his teammates, several of whom were beaming when talking about him after last week’s game.

“I’m just so proud of him, man,” running back Jeremy Cox said. “Blake stepped up to the challenge. When his number was called, he did what he was supposed to do.”